We are a participant in the Amazon Services LLC Associates Program, an affiliate advertising program designed to provide a means for us to earn fees by linking to Amazon.com and affiliated sites. In addition, we participate in affiliate/referral programs whereby we link to products we believe in. If you click on the link and make a purchase we receive a small percentage commission. Read the full disclosure here.
Pin
Share
Tweet
Yum
Share
Please welcome Carolyn from The Pleasantest Thing who is here today to share an easy applesauce recipe that you can make with your kids. The bonus of this recipe is that it is also an experiment that will encourage kids to start thinking scientifically. There’s so much to learn in the kitchen! 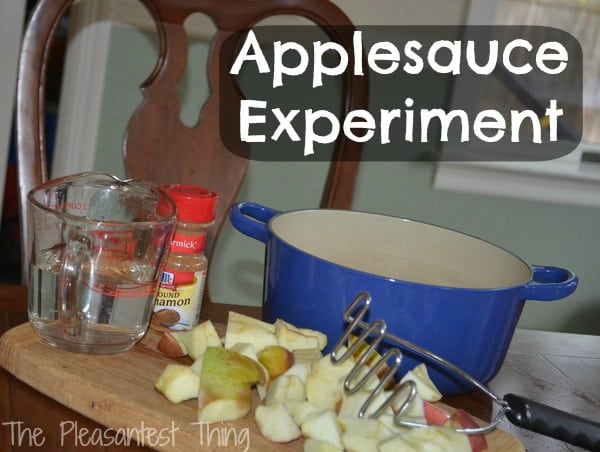 Homemade applesauce is one of my favorite fall treats. My kids, ages 4 1/2 and 1, also love fresh applesauce. My older son and I set up an experiment to see what happens when we boiled apples.
Question:
I asked my son whether he thought the apples would mash better before we cooked them, or after we cooked them.
Set-up:

Test:
My son poured the apples and water into the pot, and then sprinkled as much cinnamon as he wanted into the pot. (note: it was a lot of cinnamon, so if that’s not your thing, you may want to put some cinnamon on a measuring spoon). Then he tried mashing it.
I carried the pot over to the stove, and heated it until the water was mostly gone (Note: please make sure the kids stay well away from the hot pot!). Then I let the pot cool, and brought it back for round 2 of mashing.
My son mashed up the applesauce, and then we shared a delicious applesauce snack.

Observations:
I asked my son which set of apples was easier to mash, and he responded that the apples that were cooked. I asked him why he thought that might be, and he said because cooking made them soft. He also commented that this was funny, because sometimes cooking makes things harder (like muffins).
This was a fun way to involve my son in cooking, and work in a little science. It didn’t take that much longer to have him help, and it was a fun way to connect over food.
Carolyn is the writer at The Pleasantest Thing blog, and a mom to two boys, ages 4 1/2 and 1. She believes play is critical to child development. Her blog focuses on learning and developing imagination through adventure, play, reading, and nature. You can also join in the fun by following her blog on Facebook or Pinterest.Thank you so much Carolyn! I love how this simple experiment yielded yummy results and got your little one in the kitchen and cooking. Here are some of my favorite posts from The Pleasantest Thing.