We are a participant in the Amazon Services LLC Associates Program, an affiliate advertising program designed to provide a means for us to earn fees by linking to Amazon.com and affiliated sites. In addition, we participate in affiliate/referral programs whereby we link to products we believe in. If you click on the link and make a purchase we receive a small percentage commission. Read the full disclosure here.
Pin117
Share15
Tweet
Yum
Share
132 Shares
If you belong to a warehouse club then chances are you’ve purchased an enormous package of toilet paper. We recently bought one that contained 30 rolls and when I looked at them, I started thinking of some Fun Math Games my kids could play with them. As we got to exploring, I realized that my kids were learning a lot more than counting. They were using their gross motor skills, learning principles of balance and even practicing cooperation. And you thought toilet paper was only good for, well, you know… For more fun math games, don’t miss this Pattern Block Math Game. 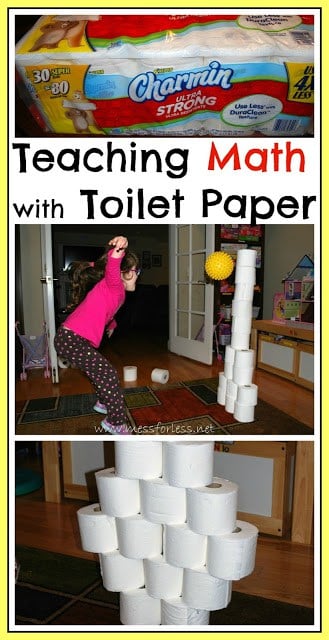 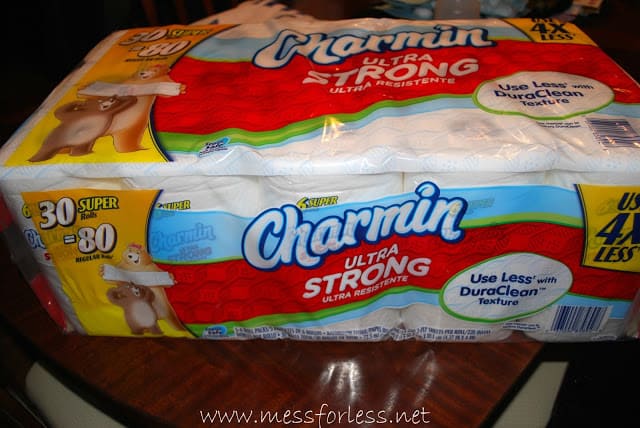 My daughter thought it was so funny that we were going to be playing with toilet paper. She happily helped me remove all the rolls from the packaging. 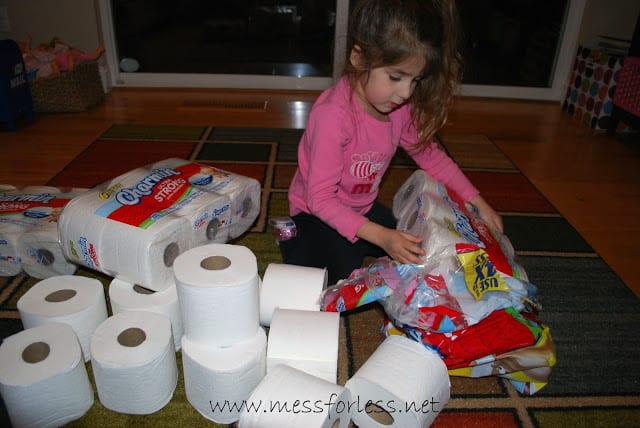 I didn’t tell her what I had in mind for the rolls, so she just started building on her own. She built and stacked in so many different ways. If you don’t get to play any games with the toilet paper, just give it to your child for building and they will be happy. 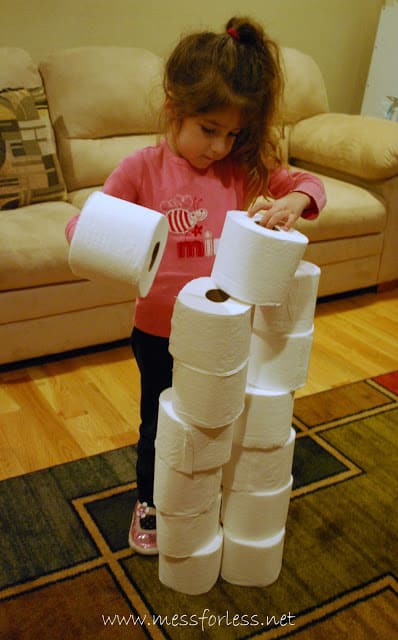 She called this one a castle. 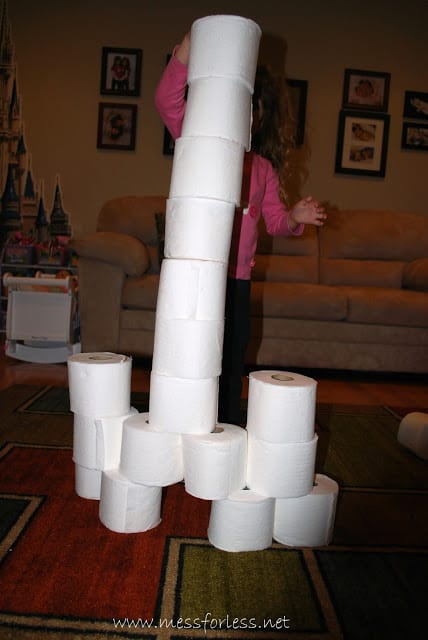 When my daughter finished building a tower she and her sister had fun running through it and knocking it down. And no one got hurt because the toilet paper is super fluffy! 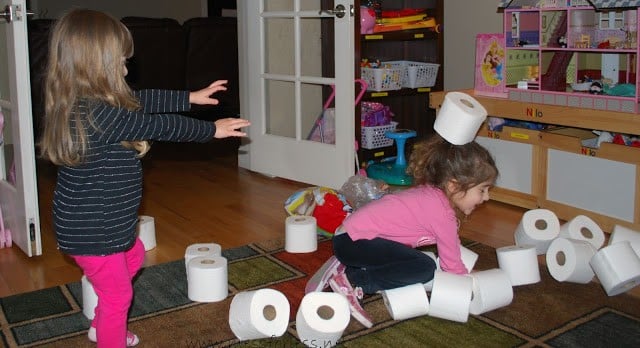 I was excited to share my game idea with the girls. We built a tower from the rolls and I brought out a ball. I showed them how they could stand a few feet away and roll the ball to try and knock down the tower. 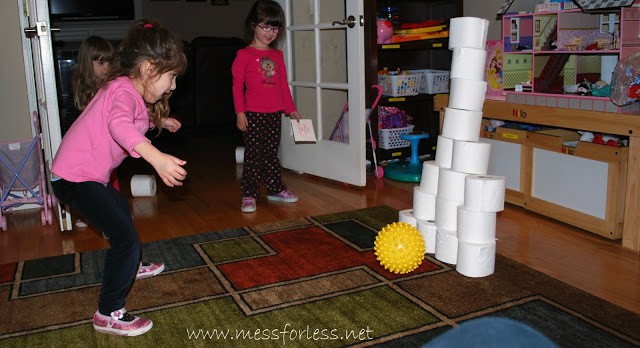 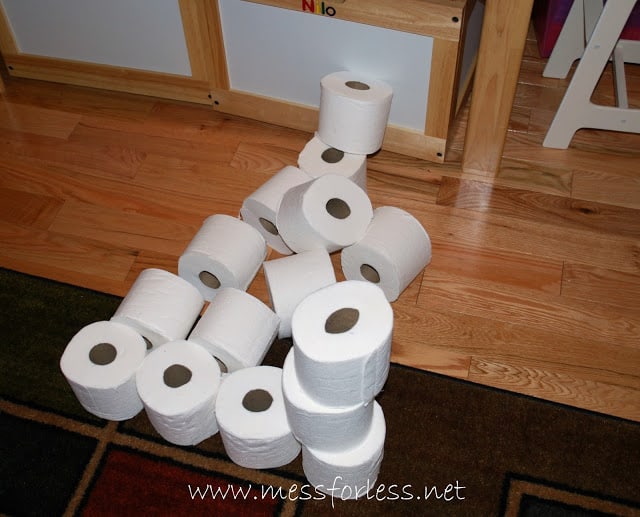 We rebuilt the tower each time someone got a turn. 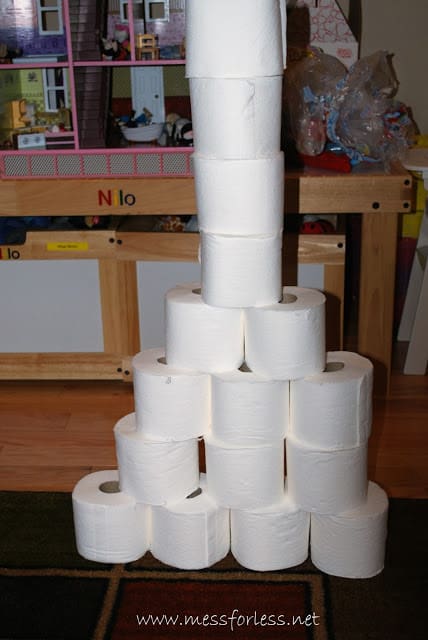 I just love this action shot of my daughter A. She decided throwing was a more effective method than rolling. 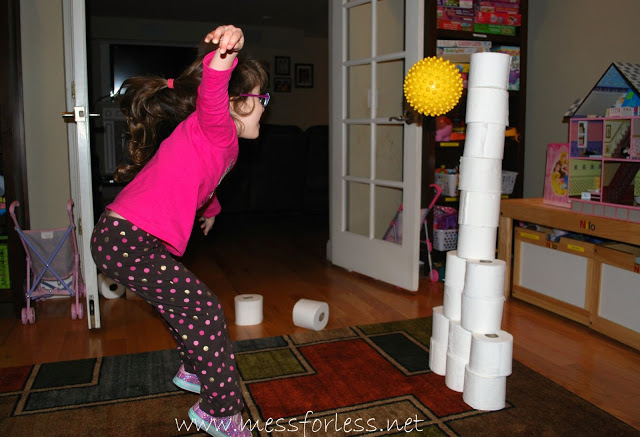 Now she counted how many she knocked down. She remembered that her sister knocked down 9 and discovered that she knocked down 11. “11 is more than 9,” she shouted. We talked about how much more and she thought for a moment and answered “2!” The kids spent lots of time using their math skills to try and figure out who had knocked over the most rolls and who had gotten the fewest. 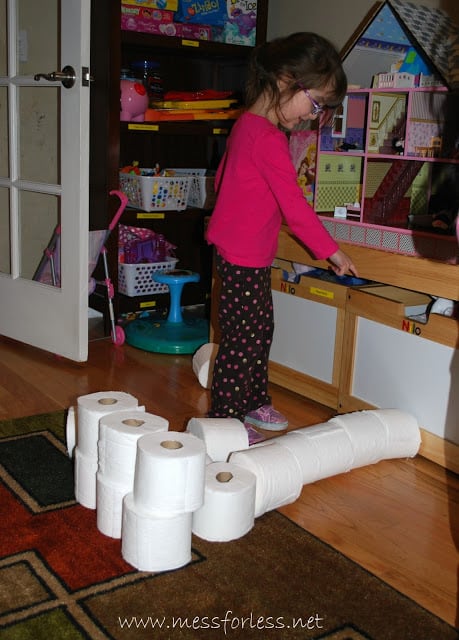 When my husband heard all the excitement going on the playroom he came in to see what we were doing. He was pretty surprised to find us playing with toilet paper! But it didn’t take him long to get in on the act. I think he had more fun than the kids as he built toilet paper structures for them to knock down. 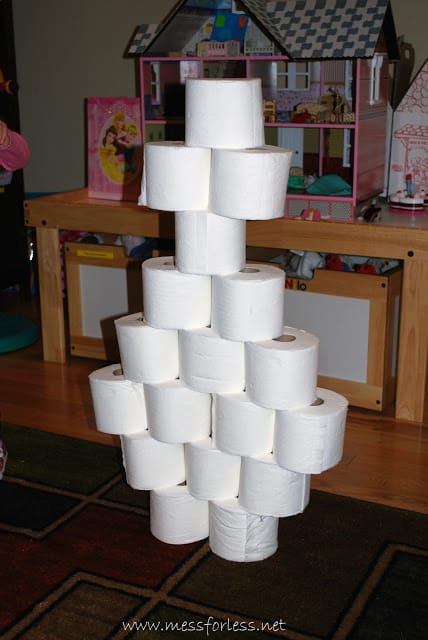 He wanted me to let you know that this one is a tree. 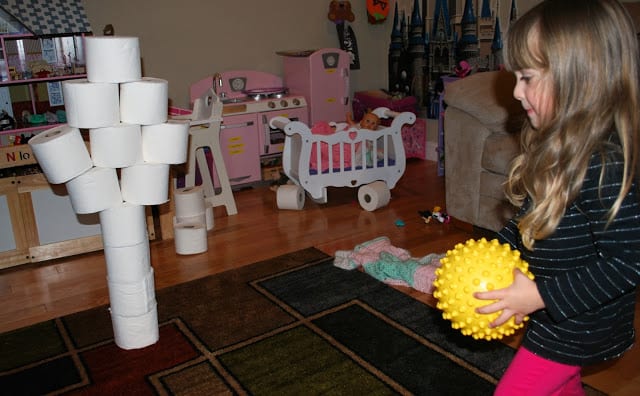 So next time you bring home some toilet paper from the warehouse club, let your kid (and husband) play with it for a while in some fun math games. They’ll be practicing math and other important skills. One more bonus: the paper is silent when it hits the ground, unlike blocks which make a big racket.
If you are looking for more fun activities for kids, check out Green Kid Crafts, an earth friendly monthly craft subscription box for kids that sparks creativity while teaching kids a respect and love for the environment. These boxes are themed and each month will be filled with fun projects and creative activities than can be enjoyed by kids from ages 3-10.
Since Green Kid Crafts is an earth friendly company, they use sustainable, safe materials in all of their products. They also give a portion from each sale to environmental non-profits. Learn more about a monthly subscription of fun!
For more Math fun check out:
Ice Cream Math Games 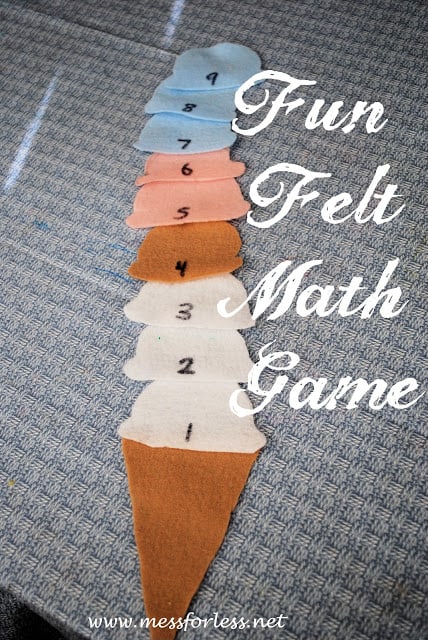 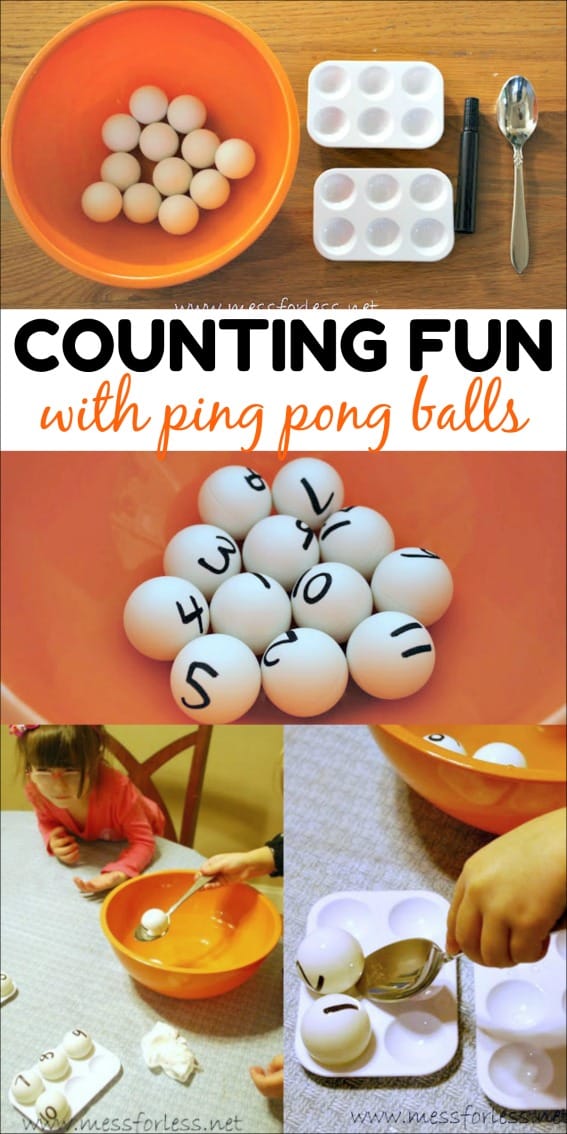