We are a participant in the Amazon Services LLC Associates Program, an affiliate advertising program designed to provide a means for us to earn fees by linking to Amazon.com and affiliated sites. In addition, we participate in affiliate/referral programs whereby we link to products we believe in. If you click on the link and make a purchase we receive a small percentage commission. Read the full disclosure here.
Pin53
Share
Tweet
Yum
Share
53 Shares 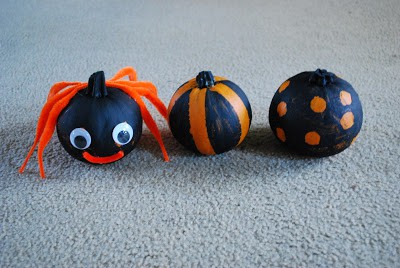 Today’s idea is brought to you by Twitter.  I am a recent convert and one of things I like best is connecting with other mommy bloggers.  Yesterday, I responded to a tweet from the fabulous Frugal Family Fun blog run by Val.  Seriously, if you have not checked out her ideas, you should.  This lady is an idea machine!  Anyway, yesterday I tweeted to her that I planned on painting pumpkins  with girls.  I didn’t have any ideas how we should do it, so I asked her for ideas.  She suggested decorating the pumpkins with star stickers, painting them and peeling off the stickers when dry to reveal the pattern. So thanks to Val for the inspiration here.

Supplies you will need:

This fun kids crafts cost us next to nothing.  Last weekend, we went to a pumpkin jubilee (not sure what qualified it as a jubilee rather than a festival) and the kids got free little pumpkins.  I love getting things for free and free pumpkins, while not as cool as a free car, are still pretty cool.  After hearing Val’s super idea, I went in search of some star stickers.  I only had enough star stickers for one pumpkin, so I used masking tape on another, and circle stickers on the third.  The only circle stickers I had were price stickers from our last garage sale, but they worked fine. Use what you have, I always say. 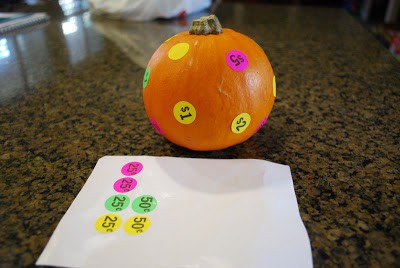 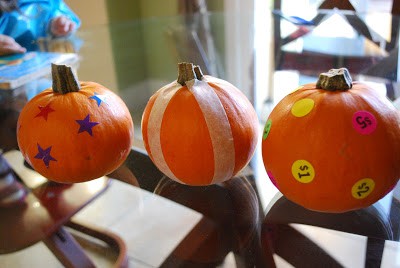 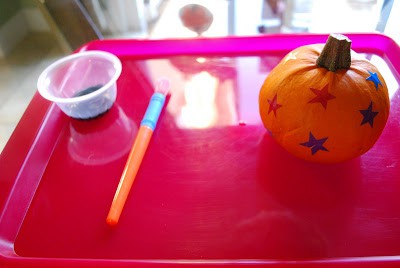 I thought using black paint would give a nice Halloween effect when the paint dried and we peeled off the stickers.  The kids didn’t quite understand what the end result was going to be, but they were just happy to be painting the pumpkins.
B started off by just painting each star black. 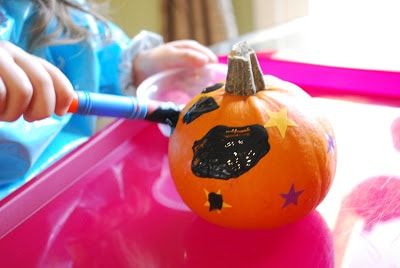 Eventually (in her own time of course) she started to paint the rest. 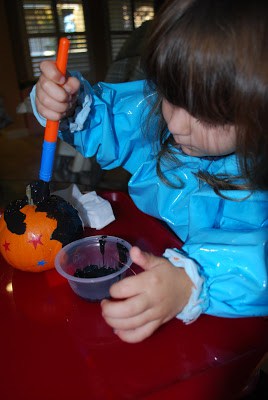 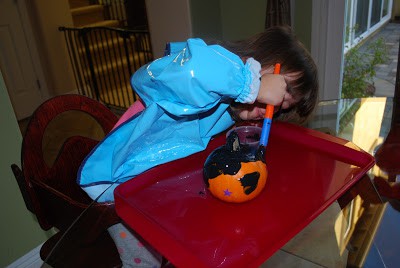 A word about little C.  Eagle eye readers may notice she is wearing a Safeway shopping bag as a smock.  Fear not, she was attended the entire time.  Plastic bags are a choking hazard for kids so I don’t recommend trying this at home.  We cut a big hole in the bottom and put it over her head and it worked in a pinch.  I have a feeling Santa will be bringing C a smock.

“A” painting her circle pumpkin. 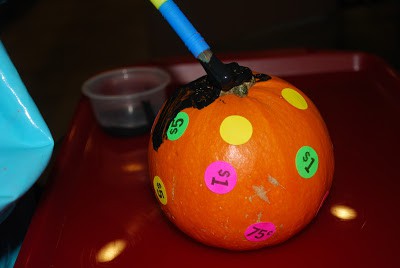 C paints her masking tape pumpkin.  She got bored of this after a while and never finished… 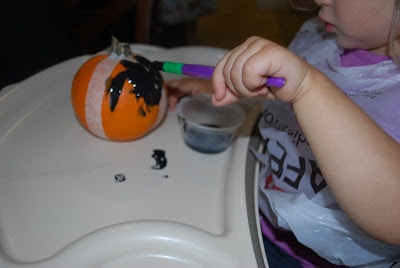 But not before she made THIS mess. 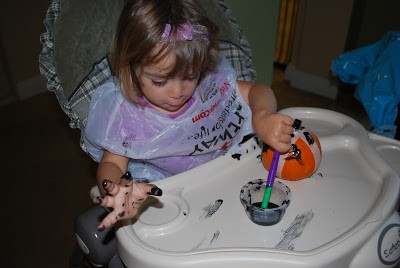 This is what C left behind.  Later, “A” asked if she could paint the rest of C’s pumpkin.  So C’s pumpkin was really a joint effort. 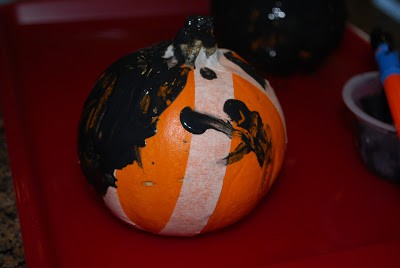 After the pumpkins dried overnight came the fun of removing the stickers and seeing how everything looked.  This is where we ran into some problems.  The tape and circle stickers removed easily.  The stars however were a different story.  I have no idea what sort of mega glue the star stickers had on them, but I could not get these things off.  Correction: I was able to remove 1 star sticker.  Look how cute the pumpkin would have looked if they had all come off. 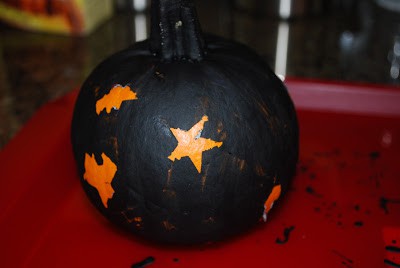 But they did not.  Most were just plastered on and the ones I was able to pry off peeled big chunks of paint off the pumpkin.  Lesson learned: test the stickiness of your stickers before putting them on your pumpkin.  Super sticky = super tricky to remove. 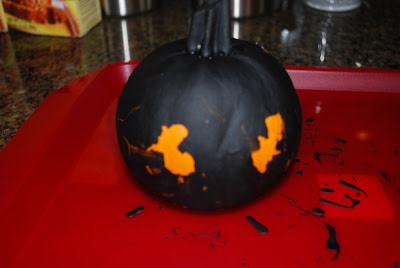 Now what?  Of course this had to happen to B’s pumpkin.  B is my most sensitive and least “roll with the punches” kid.  Sigh.  I had to think fast about how to cover the mess.  So I stuck some googly eyes to the worst peeling spots and added some pipe cleaner hair.  The hair was really cute but when I added more it started looking like a spider. So that’s what I went with. 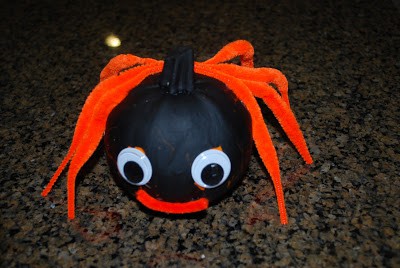 I just love our little spider because it was born out of failure. 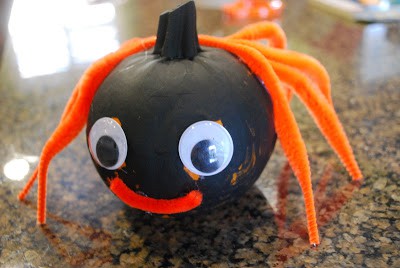 Here are our three decorated pumpkins.  Not bad for an idea born on Twitter and executed by 3 year olds. 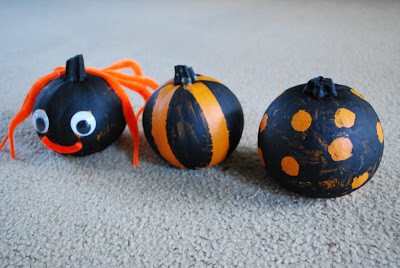 If you liked this Halloween activity, you’ll love: