Kids love mac and cheese. It has been a staple with my kids and they are picky with a capital P. They are not fans of veggies, so I have to be creative with the way I present them. In the past I have sneaked them into Carrot Muffins and Spinach Muffins. Today, I am sharing a recipe for some deliciously cheesy Hidden Veggie Baked Mac and Cheese.It is so good that you won't believe there are veggies in there. If you are still craving mac and cheese try this exciting variation - One Pot Chili Mac and Cheese. Be sure to also try our Chili Macaroni Casserole.

Most of this hidden veggie baked mac and cheese recipe is made on the stove top. You just throw it in the oven for the last bit to bake.

You can certainly up the level of cheesiness in this recipe. I thought 2 ½ cups were plenty, but you could go for 3 cups and have the ultimate cheesy meal. We used a cheddar/jack mix but you can use all cheddar if you want.

The secret veggie in the baked mac and cheese? Carrots! I pureed them ahead of time and froze them in an ice cube tray. They I just popped them out as needed.

I used one cup of thawed pureed carrot, but as with the cheese, you can up the amount of carrot. If you choose to do this, taste it as you go along to make sure you are not adding so much that it changes the taste of the dish.

After adding the milk and mixing all the ingredients, I poured it into a 2 ½ quart CorningWare baking dish and popped it in the oven.

Thirty minutes later, my kids were chowing down on some scrumptious mac and cheese never knowing that they were getting some nutritious carrots as well. Mission accomplished!

This is a great recipe to bring to a potluck. This would also be delicious to make with some chicken, ham or other kind of meat mixed in. Yum! I'm getting hungry just thinking about it.

Have you heard about Eat At Home Meal Plans? If the price of eating out or the decision of what to make for dinner each night is stressing you out, then you must try these meal plans. There is one for every diet and appetite. 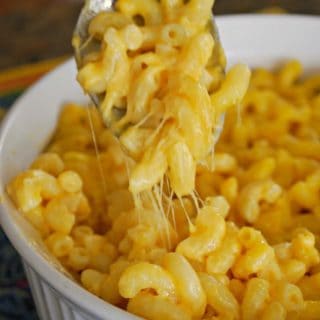 If you liked these Hidden Veggie Baked Mac and Cheese check out: