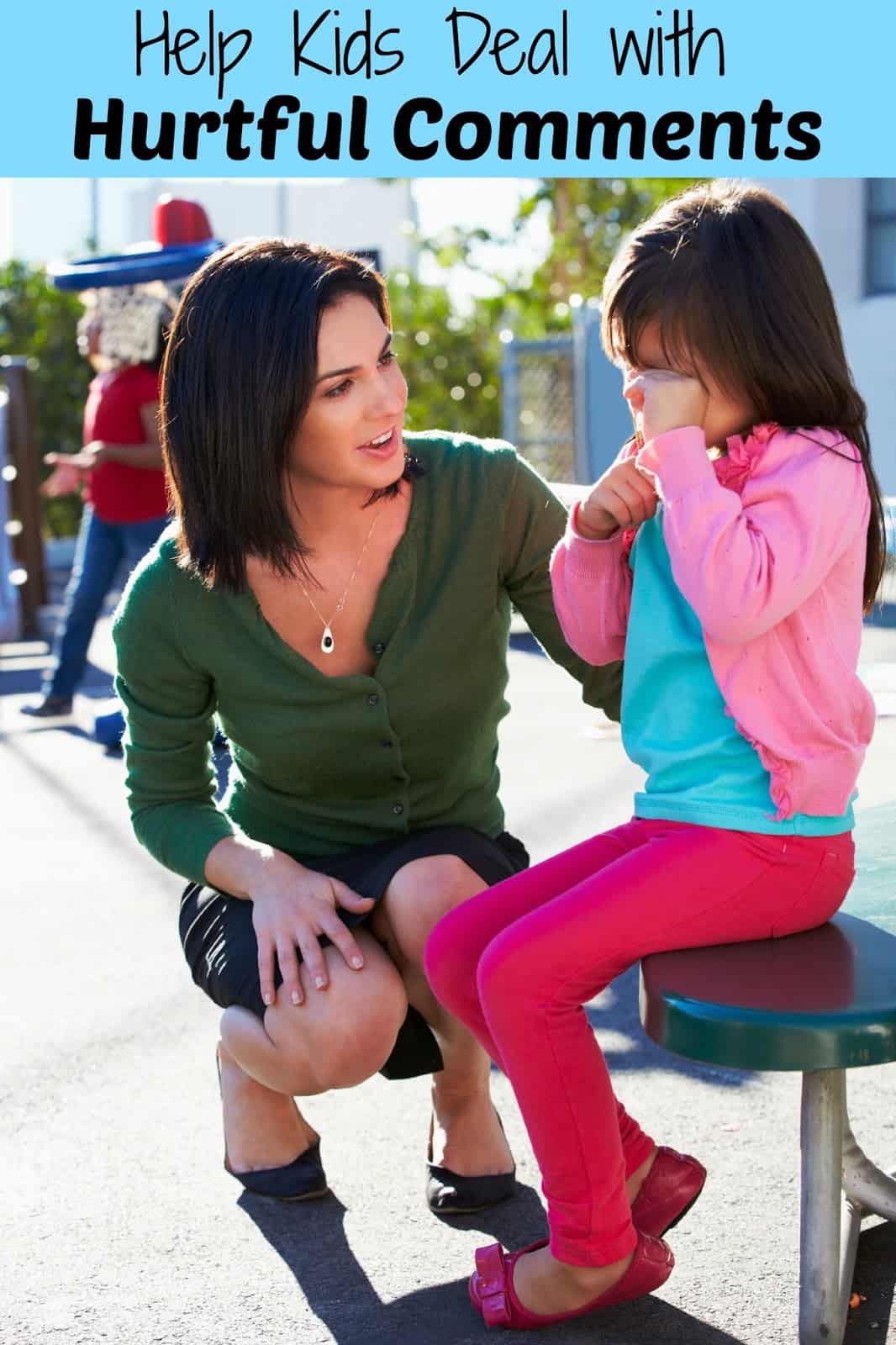 Last year I embarked on a wonderful series called Get Ready for K Through Play with some of the best kid bloggers out there. Well, it was such a success and helpful to so many parents, that we decided to do it again. Over the next 6 weeks, we will provide you with all the tools you need to prepare your child for Kindergarten. Each week, we will to focus on a different Kindergarten readiness skill. This week, we are sharing ways to develop Social and Emotional Skills that will help your child succeed in Kindergarten. Last year I shared about Helping the Shy Child Prepare for Kindergarten. This year, I will be focusing on how to Help Kids Deal with Hurtful Comments.

I feel like I have a bit more knowledge of getting ready for Kindergarten this year, since my twins just completed their Kindergarten year. There were some things that came up that I would not have expected. One day, one of my twins told me that a girl at school told her she didn't like her. My kids have been in preschool for a number of years, and this has never happened before. This was entirely new territory for me, and I'll be honest, my first reaction (which I didn't tell my daughter) was "I'll fix that kid!" But logic and rational won out and I had to come up with some strategies and tips to share with my daughter in case this ever happened again with this girl (it did) or anyone else (it did not).

Tips to Deal with Hurtful Comments

1- Give your child time to communicate

My daughter didn't come straight home and tell me that a girl was mean to her. She seemed like her normal self when she came home, and later in the evening when we were cuddling, she told me what happened. Boy, was I glad I had taken the time to cuddle with her and give her an opportunity to share. My daughter does not like answering a bunch of questions and I don't think she would have shared if there had not been that silent one on one time.

As a parent, a very natural reaction when someone makes a hurtful comment about your child is to say, "well, that kid is mean." Please refrain from putting down the other child in front of your child. This only teaches that calling names is okay and may build a barrier to your child ever becoming friendly with the child who has hurt them.

We talked about how the hurtful comment made her feel and thought about if she did anything to this girl causing her to say that. In some situations a child may unknowingly or on purpose do something to classmate that leads to them making a hurtful comment. The mean comment is still unwarranted and unacceptable, but sometimes knowing what happened before is helpful in diffusing the situation. If you find your child did do something, such as not include the child in a game, it is easy to help them correct the behavior in the future so the other child responds in a more positive manner.

Next, we came up with responses that she could say when this girl said "I don't like you." The first thing my daughter thought she could do was say "STOP!" in a loud, assertive voice. Okay, she came up with the "stop" and I added the loud and assertive voice. My daughter is quite soft spoken, so we really had to work on her loud, assertive voice. I explained to my daughter that not everyone would like her. I told her that not everyone likes me. And that is OK. Not everyone needs to like her. She came up with list of classmates that did like her, who she could go play with instead. So after she would say "STOP!" she would respond "you don't have to like me," and walk away. Of course your child's response will be different based on their particular situation. In our case, this girl kept telling our daughter that she didn't like her, so that response was appropriate.

You want your child to be as prepared as possible in the situation. The best way to do that is to practice and rehearse what that will say. We took turns being the child who makes the mean comment and the child who stands up for herself. This way my daughter could listen to how I stood up for myself and she could work to make her inflections similar.

I am proud to say that the girl stopped bothering my daughter after my daughter used these tools a few times. There were even days when my daughter said she played with her. Now I don't think they will ever be best friends, (they have very different personalities and my daughter has a long memory) but this is a step in the right direction.


For some great books to help kids deal with hurtful comments and bullying, check out:
Tease Monster
Bye Bye Bully
Stop Picking on Me
The Bee Bully

Join me here at Mess For Less on Wednesdays for Get Ready for K Through Play. Then, please check out my fellow bloggers in the series: Coffee Cups and Crayons, Mama Smiles, Mom to 2 Posh Lil Divas, Rainy Day Mum, The Pleasantest Thing , Toddler Approved, and Here Come the Girls who will be bringing you some more great resources on each week's topic.
The topics are:
June 25 - Social and Emotional Skills
July 2 - Independence Skills
July 9 - Math Concepts
July 16 - Books, Reading and Literacy
July 23 - Fine Motor and Writing Skills
July 30 - Ready to Learn Skills
For even more ideas to prepare your child for Kindergarten, follow the Get Ready for K Through Play Pinterest Board.
Want more Mess?
Subscribe via Email or follow us on Twitter, Facebook, Pinterest, or Google+