I headed to the supermarket this morning to do some shopping and decided I didn't feel like cooking dinner tonight. Whenever I don't feel like spending lots of time prepping and cooking, I go to my old stand-by, the slow cooker. Just spend a few minutes adding some ingredients, pop a lid on it, and forget about it until dinner. This Slow Cooker Pork Roast is not only juicy and delicious, but it will free up some precious time in your day. Everyone loves family friendly recipes like this one. Don't forget to check out these other yummy slow cooker recipes.

Add seasoned water and roast to the slow cooker.

Peel a sweet potato and a yam and cut into large chunks. Place in the slow cooker with the roast.

Cut ½ large white onion into chunks and add to the slow cooker as well.

Cook on low setting for 8 hours and you will come back to this.

The sweet potato and yam really add a nice sweet flavor to this dish. The pork was so juicy and tender from being cooked in the slow cooker. Best of all, you didn't spend all day in the kitchen. 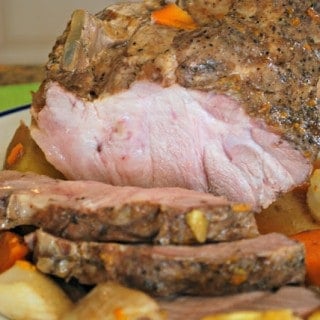