Pin4K
Share8
Tweet
Yum
Share
4K Shares
I should give my kids a byline on this post because they had a big influence on how it came to be. We took a trip to the dollar store this weekend and of course they had out all their winter and Christmas stuff. Among those goodies I found these tiny fake snow balls. I immediately thought about what a mess they would make if they spilled on the floor, but this is Mess for Less, so that didn't stop me. My next thought was that they would be cool to incorporate into a snow slime recipe. That is where my idea ended. While the kids were playing with the snow gak we made, they asked to make snowmen and I scrambled to find some items for them to use in their Snow Gak Sensory Play. If you think these snowmen are cute, you may also get a kick out of the kids making snowmen with hair curlers. 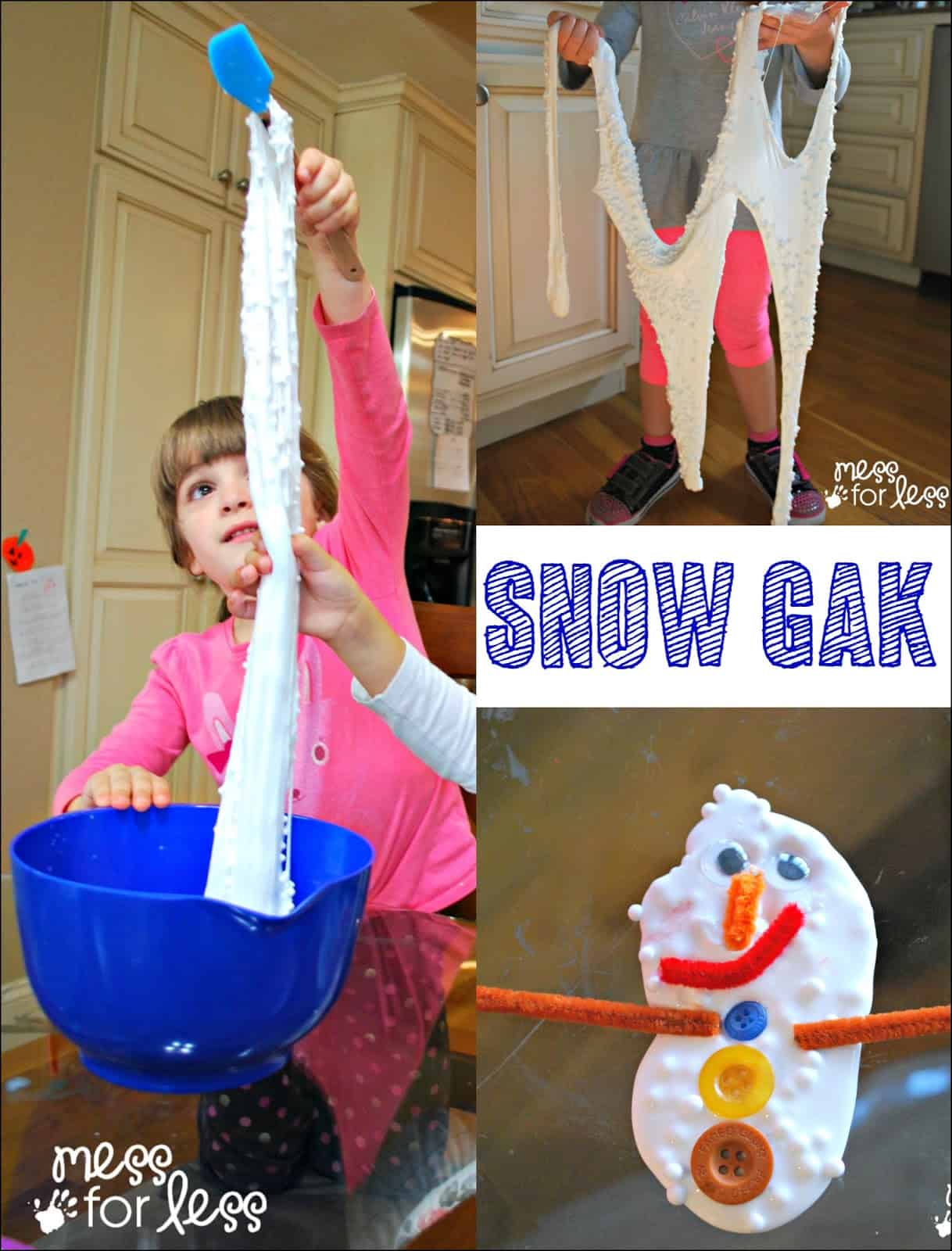 To make snow gak you will need:
To decorate your snowman you will need:
Please supervise kids when working with borax and the small items in this activity. If your child still puts things in their mouths, this is not for them. You know your child best so use your parental discretion with any activity.

Empty out two bottles of white glue into a large bowl. Fill up each of the empty glue bottles with warm water and swirl around. Pour the two glue bottles full of warm water into the bowl with the glue. 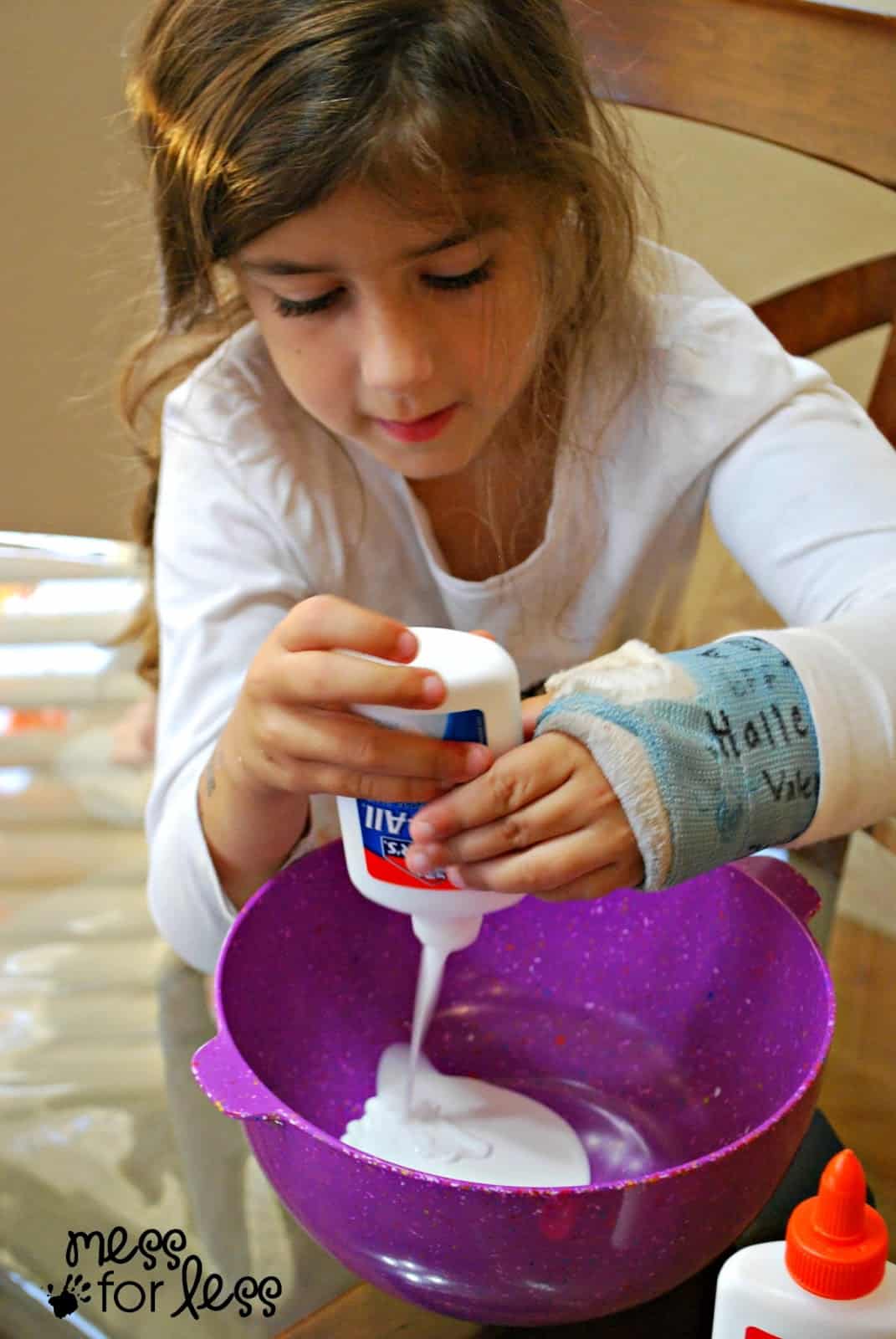 Mix the glue and warm water until it is thoroughly combined. 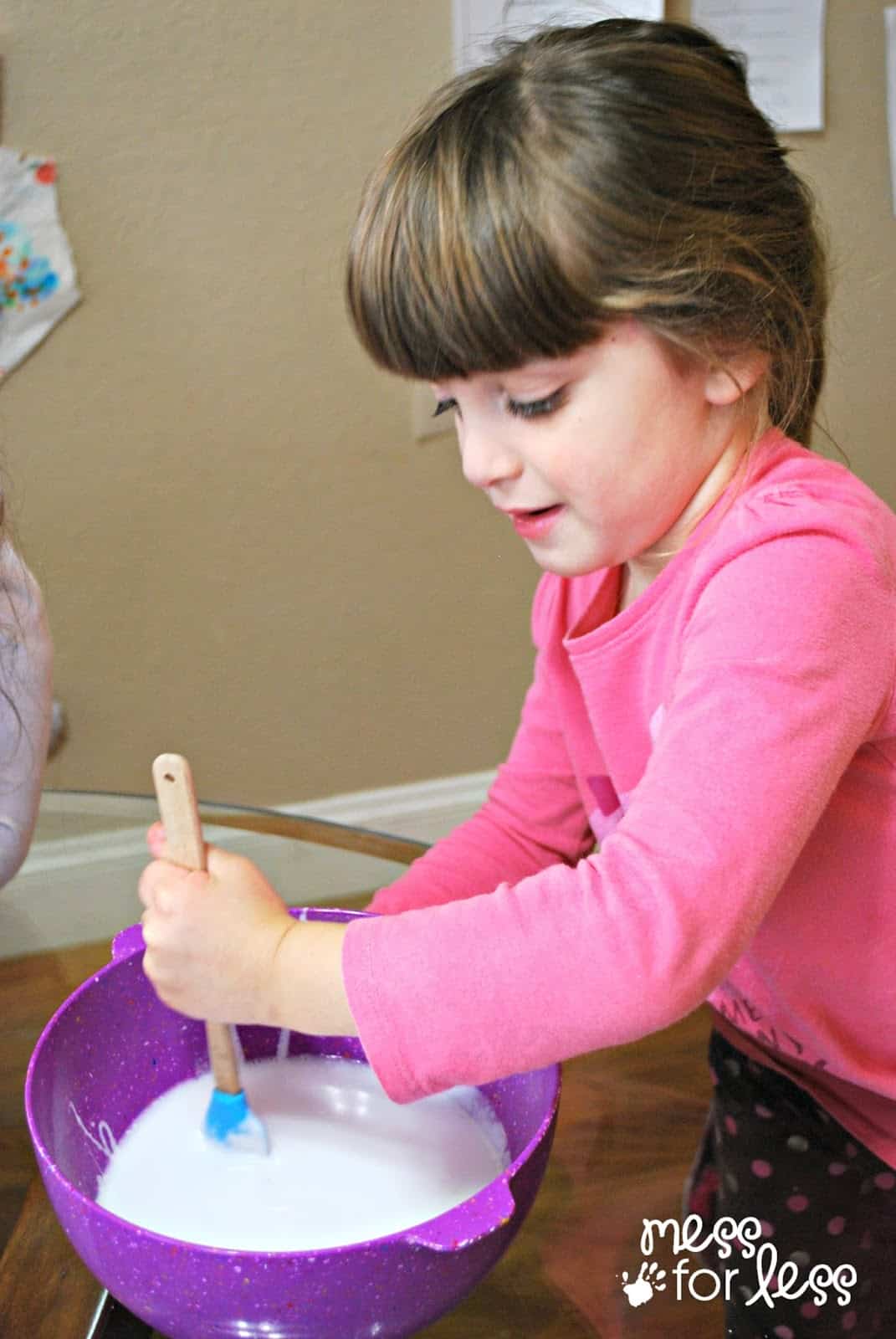 While stirring the glue/water mixture, add the snowballs. We used about ½ - ¾ of our package. Stir until the snowballs have been incorporated into the mixture. 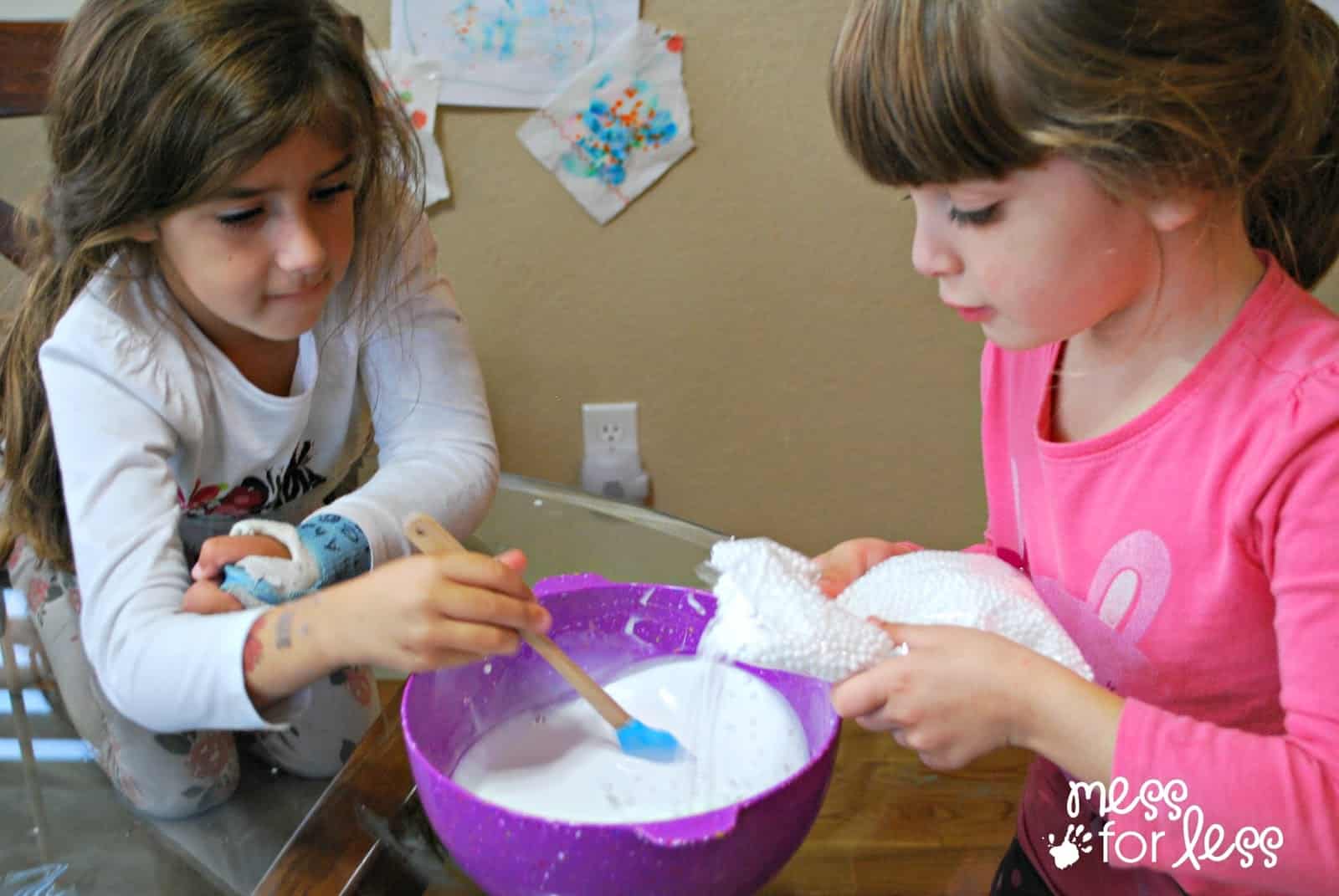 Dissolve 2 teaspoons of borax into 2 cups of warm water in a large bowl. This is a step for grown ups. 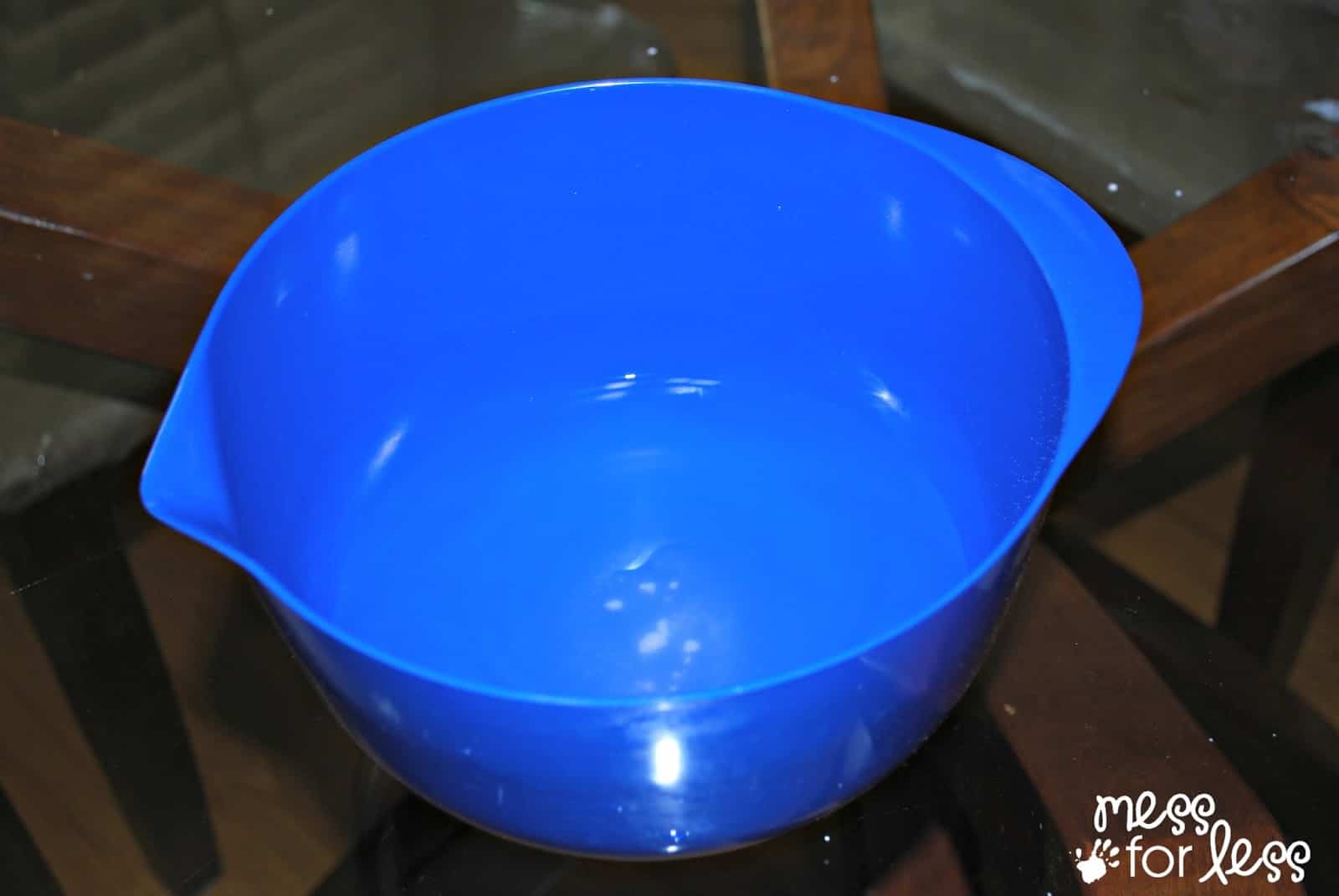 Pour the glue mixture into the bowl with the borax mixture. Almost immediately, snow gak will be formed.

Stir it until it comes together. You will still have some liquid left in the bowl which you can just pour out. 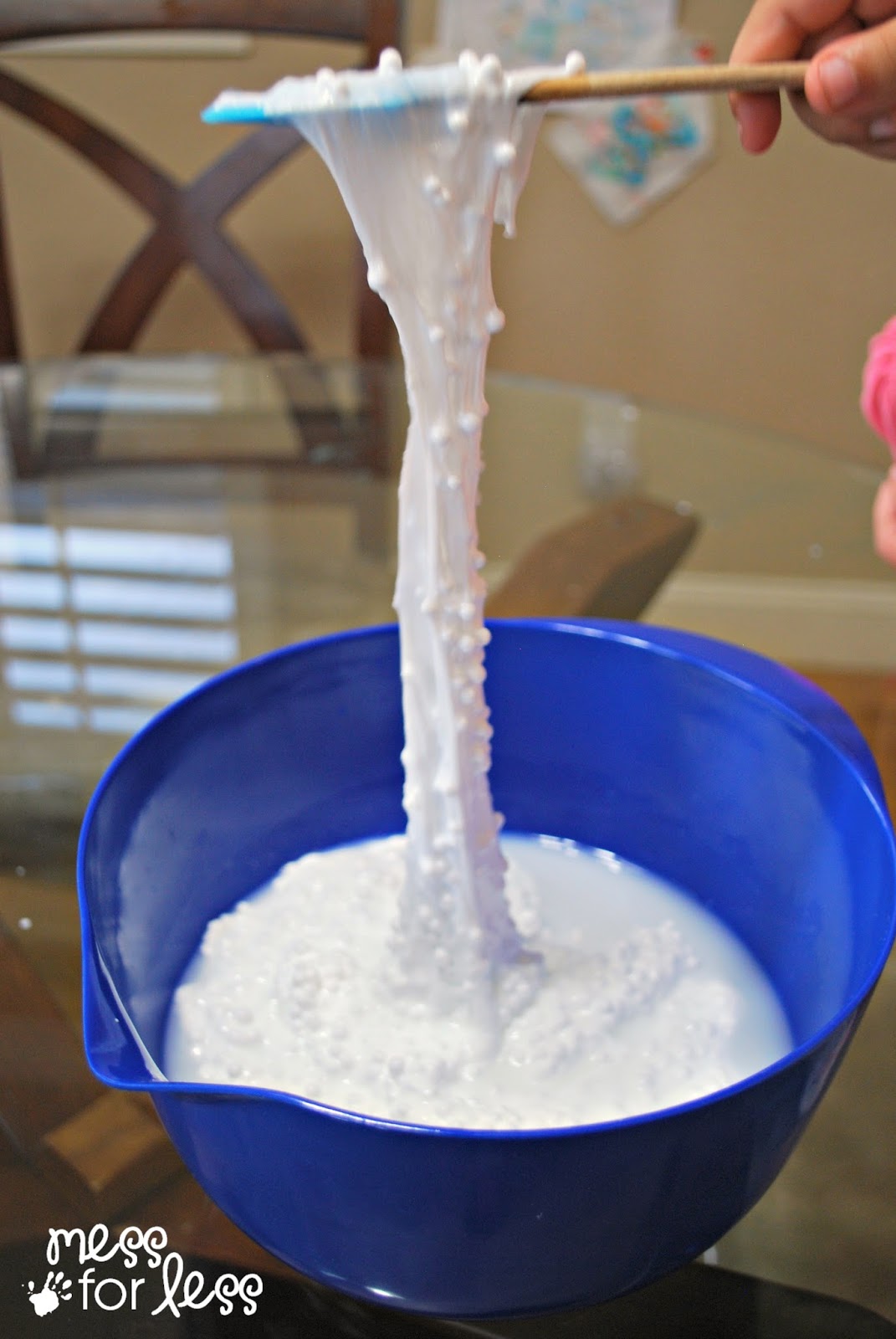 Now the snow slime is ready to be played with! 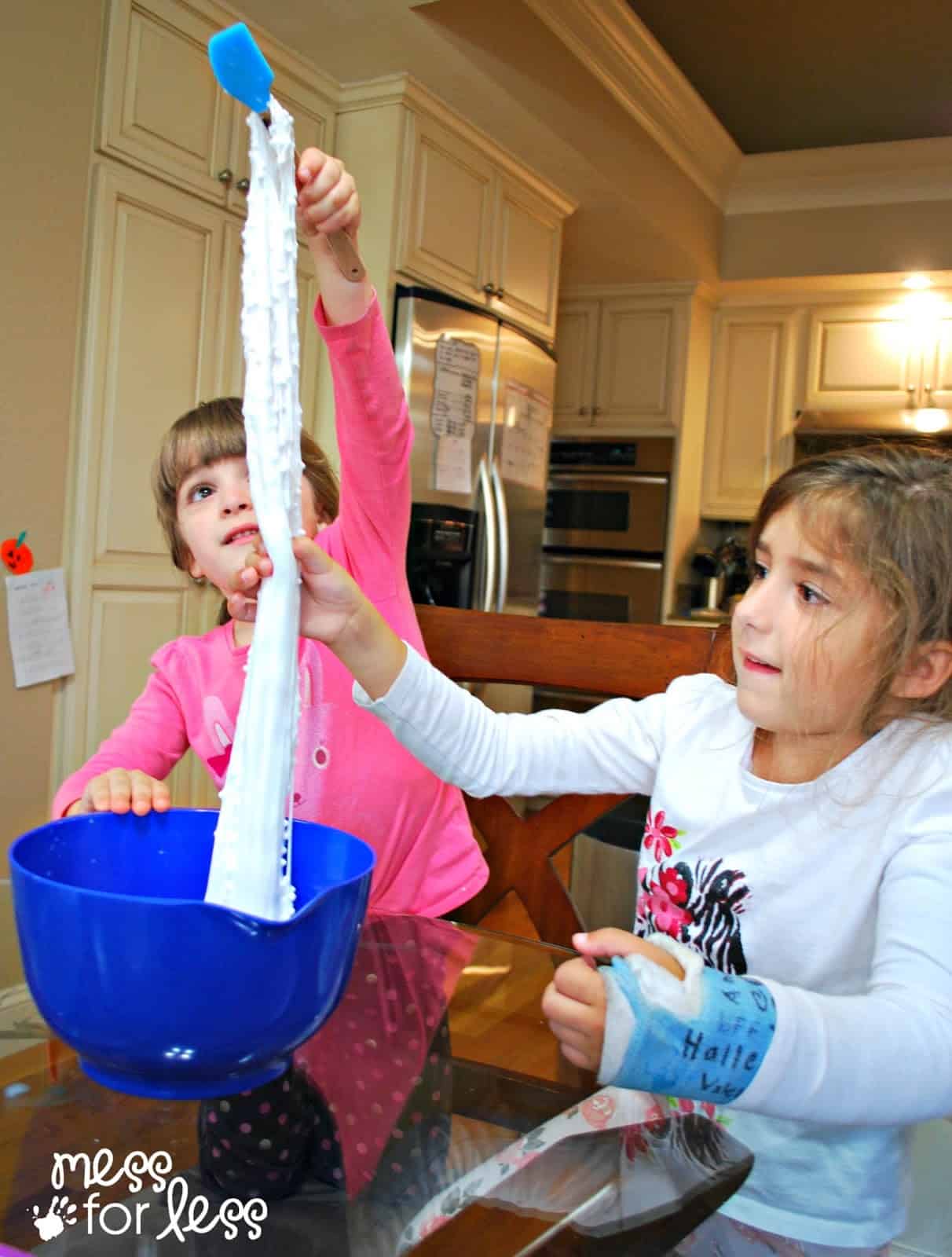 My kids couldn't believe how stretchy the gak was. They tried to see who could make the longest gak rope. 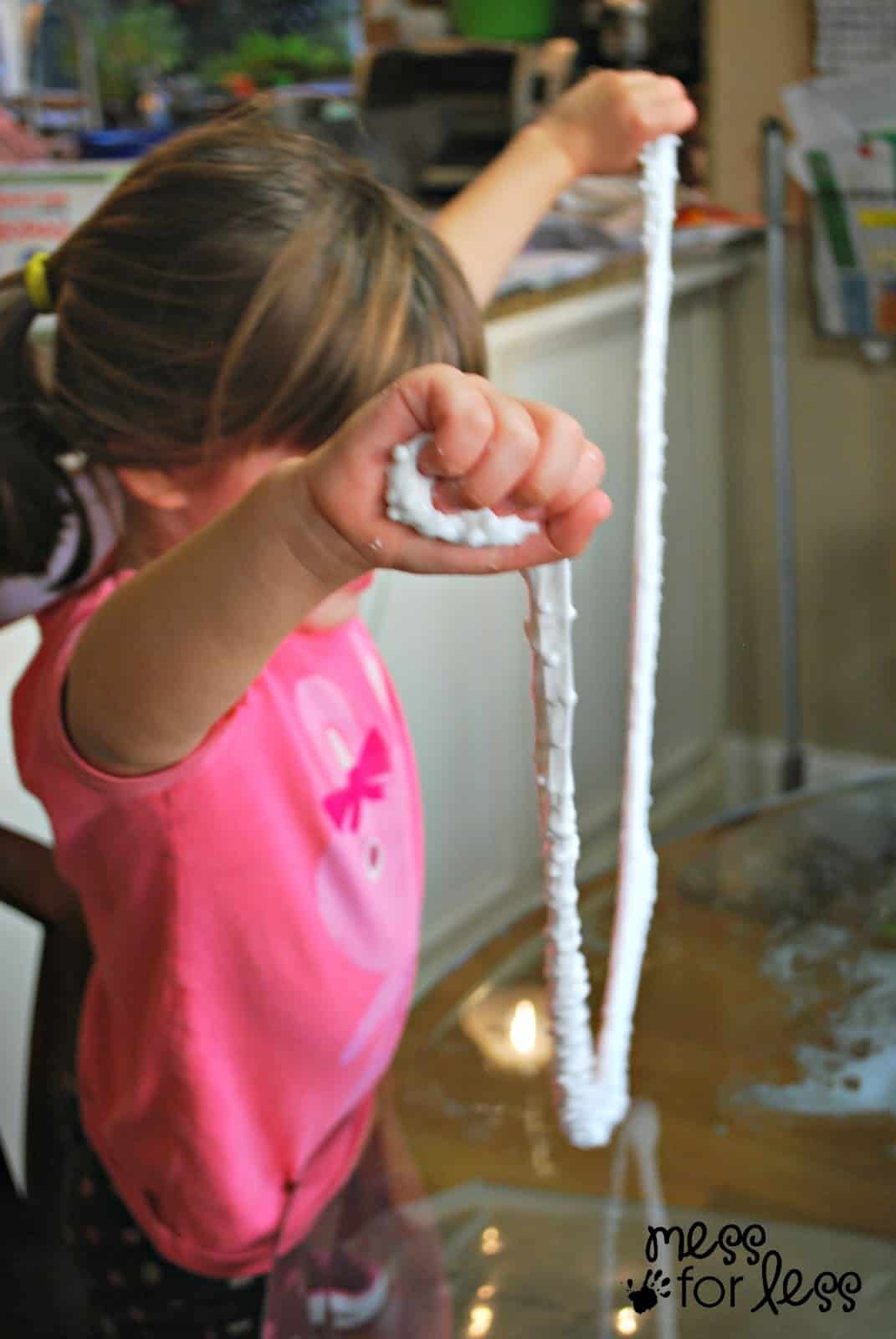 Since this is snow gak, the kids decided they would make snowmen. I wish I had thought of that. It was a great idea! Since I wasn't prepared for the turn this activity took, I had to run back and forth to my craft closet finding items for them to use on their snowmen. 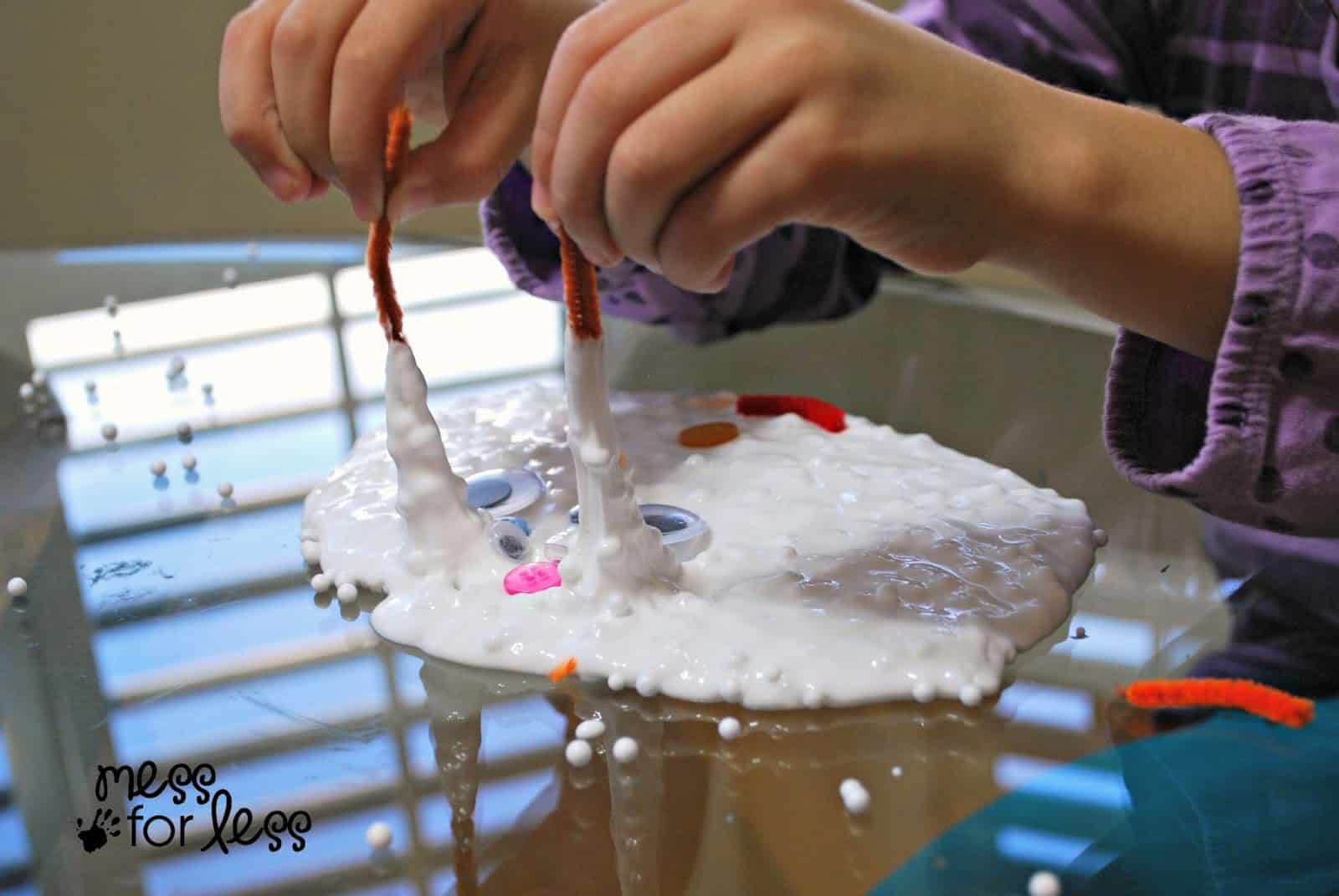 I provided the kids with some googly eyes, cut pipe cleaners and buttons and they started creating. I bet twigs from outdoors would be a fun thing to add as well. 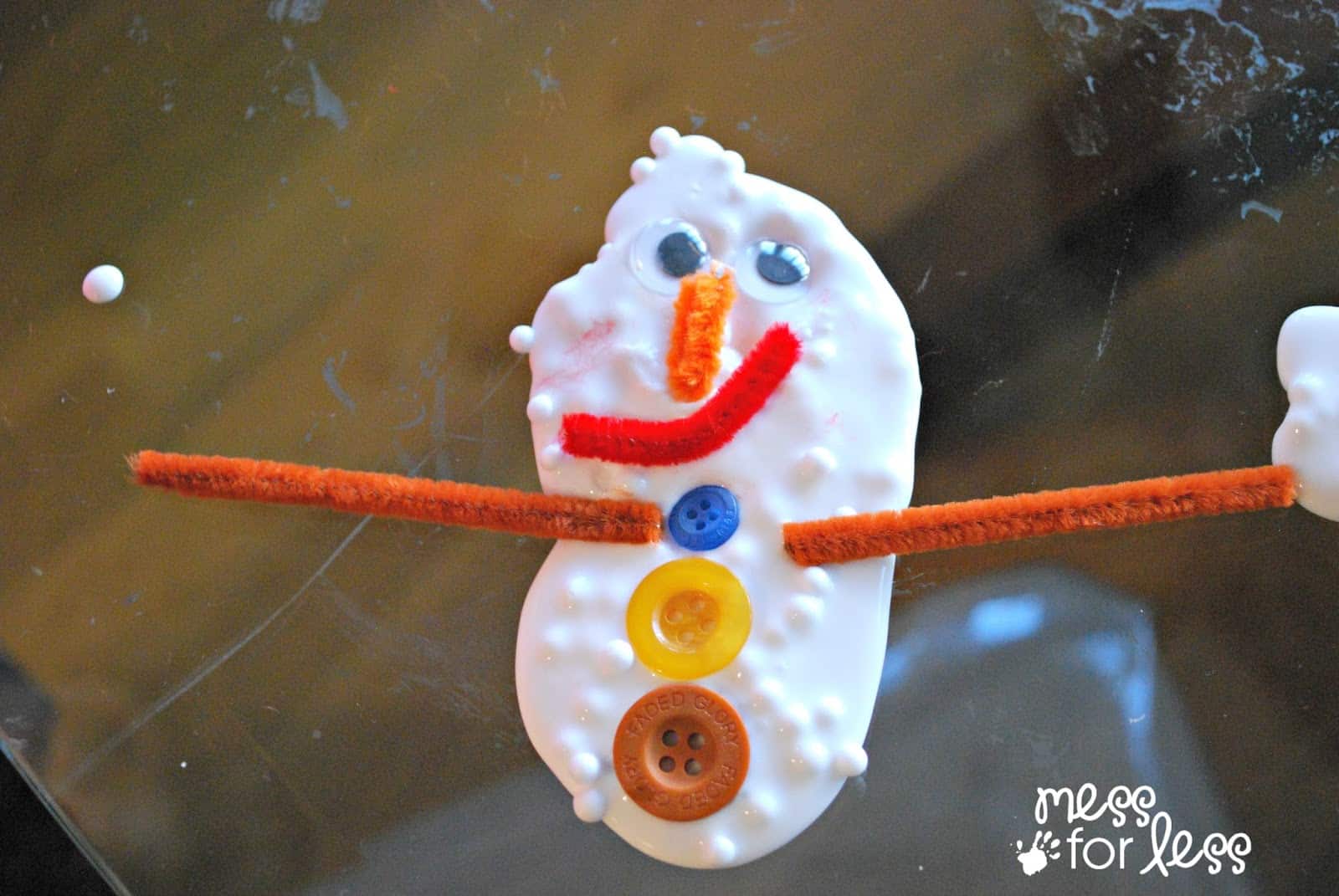 The kids had so much fun with this snow slime. We have been playing with it all week and it never stops being fun. Make sure to have children wash their hands with soap after using the snow gak. Some of the little snowballs will fall out of the snow slime as kids play but these can be easily swept away. 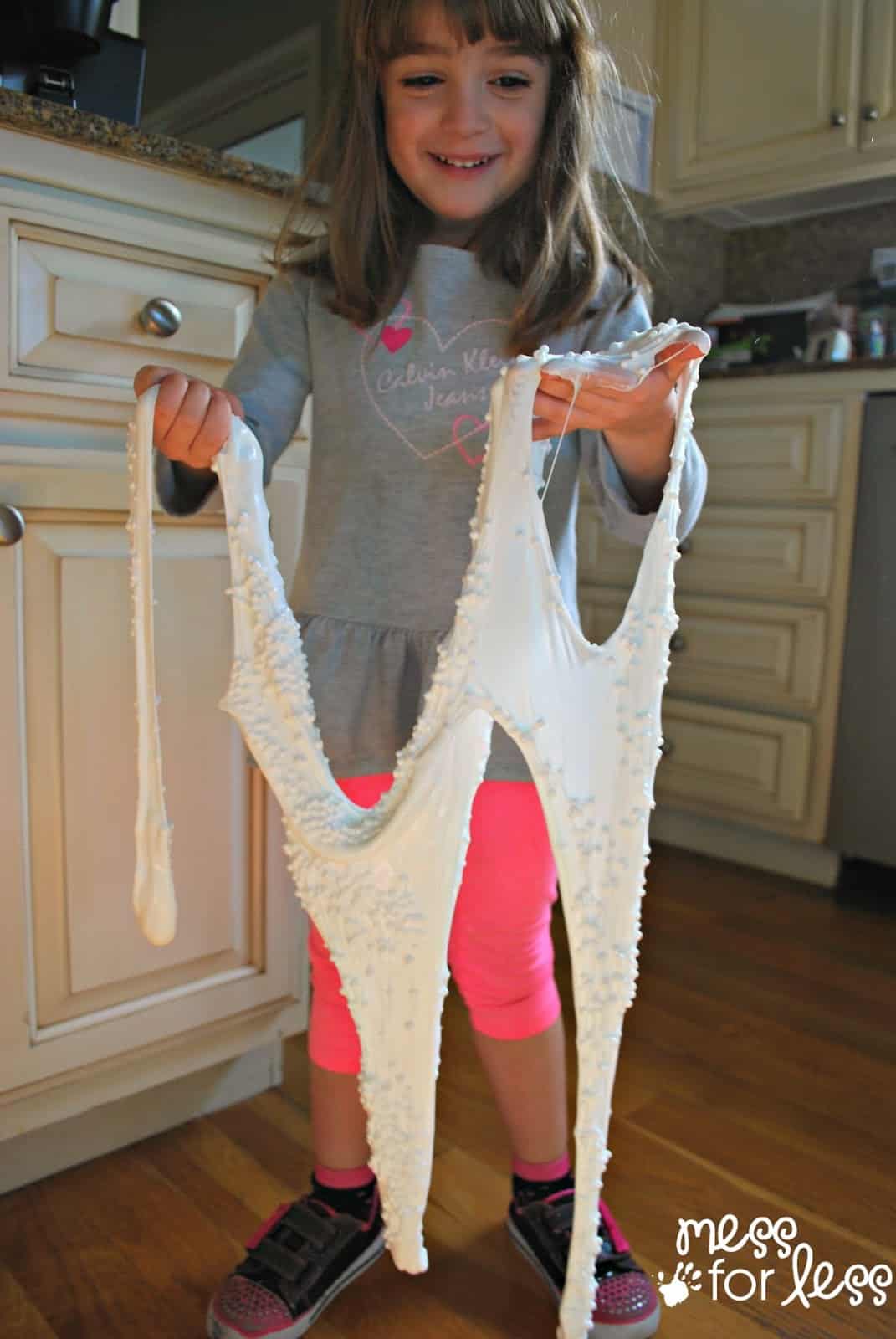 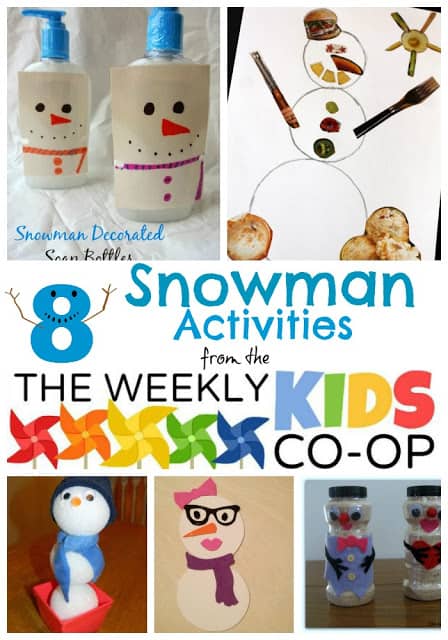 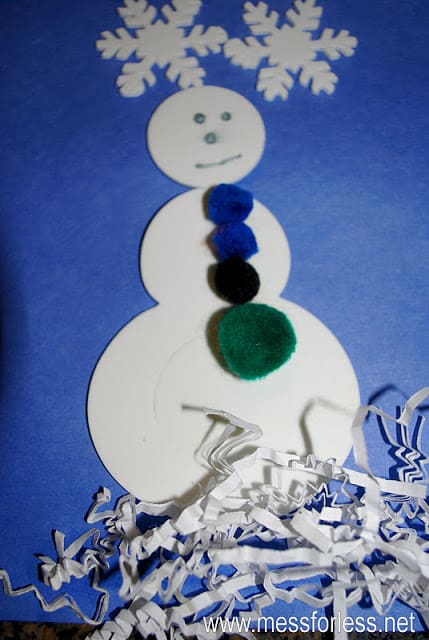