Weekends are awesome. Sleeping in, getting up late, hanging out in pajamas all morning and enjoying brunch. Okay, as the mom of the young kids my weekends don't really look like this anymore, but I remember a time when they did. This Cinnamon Roll Crock Pot French Toast reminds me of those times. If you still enjoy a weekend brunch with your family or are looking for a dish to bring to a potluck, this brunch recipe is for you. It is simple to make thanks to refrigerated cinnamon rolls and really fills you up. It also makes your house smell like cinnamon rolls which is never a bad thing. Be sure to also try this Maple French Toast Casserole. So good! You'll also love this Bread Pudding Recipe which can be a dessert or decadent breakfast.

It is no secret that I love my crock pot and use it all the time. I have used it to make Mexican Crock Pot Chicken and Crock Pot Pesto Chicken. If you are looking for more crock pot inspiration, The Fix-It and Forget-It cookbook is one of my favorites with 700 slow cooker recipes. That is enough to keep you satisfied for a few years!

This recipe uses two tubes of cinnamon rolls. You will use one tube for the bottom layer and one for the top layer.

The egg mixture will separate the two layers.

The pecans add a nice crunch and nutty taste. You can substitute chopped walnuts or almonds if you prefer.

I have to admit, I was tempted to dump the whole thing on a plate and have the world's largest cinnamon roll.

Since this crock pot french toast takes 4 hours to make, it works perfectly as a brunch. This warm dish will totally fill you up and goes great with a hot cup of coffee. 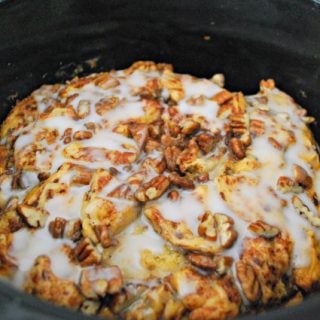