These Cinnamon Sugar Wonton Crisps are the easiest snack you can make. If you are looking for a sweet, crunchy treat, look no further. The secret to these cinnamon sugar wonton crisps are wonton wrappers. That's right, those same wonton wrappers you can use to make wontons and dumplings. If you love cinnamon and sugar as much as I do, be sure to also try these 3 Ingredient Cinnamon Sugar Twists.

I like to whip up a batch of these in the toaster oven since I can have them made in just about 10 minutes.

Grab some wonton wrappers and slice them in half. I like to make pretty triangles, but you can cut them into rectangles also.

Spray a cookie sheet with cooking spray and then lay down the cut wontons. Give the top of the wontons a quick shot of cooking spray and sprinkle cinnamon and sugar on top. Then pop in the oven and find something to do for the few minutes these need to crisp up.

These cinnamon sugar wonton crisps cook up very quickly, so keep a close eye on them. In my toaster oven the crisps that are situated in the back of the tray cook quicker than those in the front. Those are a little extra crunchy but still delicious.

These cinnamon sugar wonton crisps are great for satisfying your sweet tooth. If you are following the Weight Watchers plan, just use sugar substitute instead of sugar for a yummy snack. The wonton wrappers I use measure in at 4 points for 8 wonton wrappers which make 16 sweet and crunchy chips. 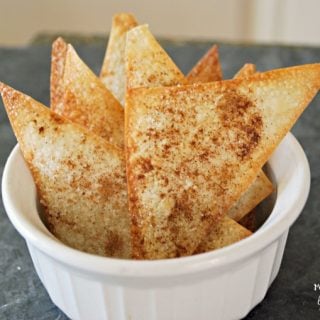 These Cinnamon Sugar Wonton Crisps are the easiest snack you can make. If you are looking for a sweet, crunchy treat, look no further. This can easily be modified to be Weight Watchers and SmartPoints friendly.
No ratings yet
Print Pin Rate
Course: Snack
Cuisine: Chinese
Keyword: Cinnamon Sugar Wonton Crisps
Prep Time: 5 minutes
Cook Time: 5 minutes
Total Time: 10 minutes
Servings: 4
Author: Vicky

Have you heard about Eat At Home Meal Plans? If the cost of eating out or the decision of what to make for dinner each night is stressing you out, then you must try these. When you sign up, you get access to four separate meal plans each month (Traditional, Wholesome Traditional, Slow Cooker, and No Flour/No Sugar). All you do is print the plans, color-coded grocery lists, and recipes you want for that month. Don't worry, there are lots of options, so even picky eaters will find something they like.

Then when it is time for dinner, make that night’s recipe (choices include make-ahead, freezer meals, slow-cooker recipes, and other time-saving strategies).

That's it! Dinner is on the table and you can enjoy a home cooked meal with the family – without the stress!

We all have more important things to do than meal planning. Let someone else do it for you with Eat At Home Meal Plans. Monthly, quarterly and annual plans are available.

If you liked these Cinnamon Sugar Wonton Crisps, you'll love: